Kourtney Klein is the new drummer in the legendary electro act Nitzer Ebb from Chelmsford, Essex, for the bands “Body of Work” tour. ZERO magazine contacted Kourtney to hear her story, that includes her participation in Combichrist. 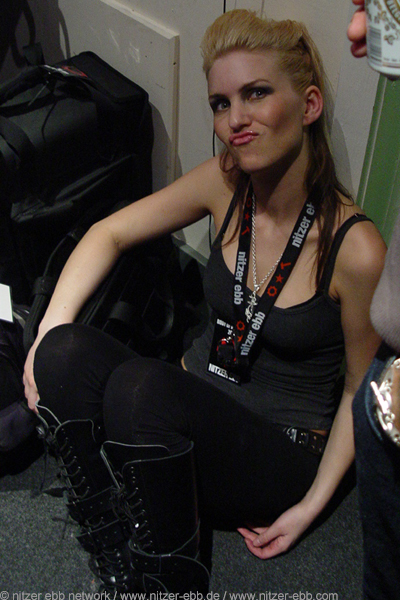 Who is Kourtney Klein? Tell us about yourself.
I live in Los Angeles, California. I am an extremely passionate, driven person. I am an extremist in the sense that if something is difficult or crazy I have to do it.

What bands have you played in?
I played in a few metal bands in my home town of Temecula, CA before moving to LA to pursue more music. My first notable band was named Sex. We played nue-metal. Since then I have played for Elmwood (punk), Lithium (rock/alternative) and Coyote Shivers(rock/punk). At some point after I moved to LA, I started to get interested in playing more of the electronic side of music. I was asked to play drums for some DJ's, so I got myself an electronic kit and started playing electronics with two house DJ's by the name of Magik Fingarz and Isaiah Martin. All together we were called the "Two Man Group." We had residencies in Hollywood and started to play shows all over the country, which is essentially how I got the job playing drums for Combichrist, and then Nitzer Ebb.

How did you became a member of Combichrist? Are you going play in the band again?
I was playing drums for the Two Man Group, and I got a phone call from Rev. John from Das Bunker to meet up and talk about my influences and see if I was interested in playing drums with Andy (of Combichrist.) We met up at a burger restaurant and talked shop. John gave me the Combichrist CD "Everyone Hates You.” I got in my car, put the CD in and called John right away. I told him I loved it. So they set up an audition for me to play a show with Combichist in LA. I showed up at the Key Club in Hollywood to find out it was a very big show and Combichrist was support for Genitourtures. I was terrified. I had never rehearsed with Combi, and had never even met Andy or spoke to him on the phone. I had only had four days to listen to the CD. I set up my drums on stage and just went for it. Half way through the show Andy walked over to me and put his arm around me and kissed me on the cheek. Obviously he was excited about my drumming. When we got off the stage Andy asked me to go on tour that night. I love Combichrist and will play with them whenever I can.

What is your strength as a drummer?
I started playing orchestral percussion in the school band (Yes, I was in band camp!). I was a mallet player (vibraphone, marimba, xylophone), then converted to a jazz drummer towards the end of high school. I followed music up through college. I still love classical music and I have a xylophone in my living room right now that I play whenever I get the chance.

I saw your drum kit with rims in the bass drums. Tell us about that idea. In which band were they used?
The rimmed drum set was an idea of mine. I have a friend that works for a wheel company called KMC. They wanted me to do an ad with some of their wheels on my car, but I thought that was boring and typical ad scenario. So I went down to their warehouse. I rolled out some rims, sawed off the back of them, and built the rims into my drums. I have been doing a lot of electronic drumming lately so i haven't been able to play them that much. The red drum set with the chrome wheels I played for a big drum show in Las Vegas a few months ago.

When was the first time you heard the band? Have they been favorites of yours in the past?
I heard about Nizer Ebb about four years ago which is very interesting because they hadn't played a show in ages. I heard a DJ play a song of theirs and loved it. Then I bought all the records and had no idea they were on hiatus. Their music was way too far ahead of their time. But as soon as I started to listen to the records, I became a huge fan.

What did you know about the band before they called you in?
I didn't really know anything, other then they were going to possibly do a reunion/best of tour and were looking for a drummer. I had no idea who was auditioning, or if they wanted an acoustic drummer or an electronic drummer. I just showed up and went for it.

As a drummer, do you like to stand up to play, as in Nitzer Ebb's former style?
Standing up to play depends on the type of music, in my opinion. Acoustic drums are sometimes overkill on electronic music, since there are so many beats and loops on the music already. However, it would be ridiculous to play standing up in something like a metal band. It's all about whats sounds best.

Which Nitzer Ebb song is your favorite?
My all time favorite song is “Blood Money.”

According to you, how is the band doing today? Can you see that Doug and Bon didn't talk for ten years?
I actually don't know what to think. I know that Bon and Doug love each other, and it's nice to see them working so well together on their band.

Tell us about the tour. What has been your favorite gig so far? Which gig are you most looking forward to?
I know I am going to sound boring, but I can't pick a favorite gig. They were all good and bad in different ways.

About the London gig, what songs will David Gooday be replacing you in? Are you looking forward to seeing the original Ebb?
David Gooday?? Who's that??!! Just kidding. I can't wait to meet him. I have no idea what we are doing performance-wise about that. The more drummers, the merrier, in my opinion.

What is happening with Nitzer Ebb after the tour?
I think it's too soon to talk about that right now. Finishing the tour is a long way off.

What kind of plans do you have after the tour?
So far I have a couple things on the agenda. I have a few remixes in the works, as well as unfinished tracks of my own I want to get done. Hopefully, I can make it out to play with Combichrist.

The tour has some short breaks. Do you have any plans for that time?
Answering interview questions (laughing).

Have you any fun tour stories to tell the Ebb fans?
The only good story to share is searching for a wi-fi service in France after the show in my pajamas. I ended up outside in an alley, following the signal strength with my laptop, and stepped in the world's biggest pile of dog poo, wearing sandles. Literally, the worlds biggest pile of dog poo. Is that the type of tour story you wanted to hear??